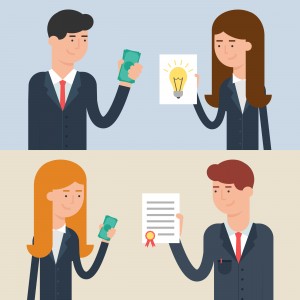 If you have obtained a patent for your invention, congratulations! A patent, however, is only the “raw material” used to generate revenue from an invention. The amount of money you can actually generate from the patent depends in large measure not only on the patent itself, but on the licensing deals you negotiate – assuming your goal is not to exclusively use the patent and keep others out of your line of work.

Often individual patent owners and small companies that own patents are short on cash and do not feel they can afford to pay an attorney to draft a licensing agreement. While it is possible to find sample licensing agreements in books and online, it is incredibly challenging for a non-lawyer to effectively use a template.  Each deal is unique and "filling in the blanks" can be grossly inadequate from a legal perspective.

An alternative, which in theory, could help reduce legal fees, would be to draft a license agreement and have an IP attorney review it. Sometimes, lawyers charge “less to read than to write,” because it may take less time. However, that is not universally true and sometimes it can take more time to ‘fix’ a poorly drafted agreement than to start from scratch. As a general rule however, if you have thought through the major issues ahead of time, it may speed up and reduce the cost of the legal work for the finished product.

Rather than searching for a template to use as a licensing agreement, it may be more helpful to look for appropriate clauses that fit your particular situation. A “mix and match” approach involving provisions from various agreements may be more relevant for your needs.

While it is easy to find sample agreements online, it may be worthwhile doing some legal research at a law library where you can find information that might not be available on the internet, if you plan to first draft your own agreement.

Whether you actually draft your own agreement, or simply compile a solid term sheet outlining major commercial terms as a starting point, there are a number of business, financial, and legal issues you should consider.

Patent owners can license their patents, patent applications, the underlying technology or any or all of the foregoing.  The most straightforward transaction is licensing an issued patent (i.e., one that has already been granted by a patent office). Licensing a patent application (i.e., prior to the patent’s issuance) or technology (i.e., trade secrets, know-how, etc.), can present complications. For example, if the patent application is never issued as a patent, what would be the result? Would payment for a license still be required going forward and what about payments already made? In the case of a license to technology, what if once confidential technology becomes public knowledge through a third party? What if the technology does not gain patent protection? Would a license still be worth a royalty payment? How can the licensee ensure that it retains rights to the technology and can protect itself from third parties?

In some cases, a licensing agreement can be a hybrid of both patents and technology.  For example, a patent owner may license a patent with technology that pertains to the use of the patent, but is not the subject matter of the patent itself. A point to consider is that under US law, you cannot collect royalties for the use of a patent that has expired, but you can collect royalties for technology, know-how or trade secrets, even if patents related to the same have expired.

The consideration in a licensing deal may be cash or cash equivalents, payable upon signing, or milestone payments due upon the occurrence of certain events. Royalty deals are also common, with a royalty in the form of a flat price per unit or a percentage of sales.

Another type of licensing transaction that does not necessarily involve payment is a cross-licensing transaction.  In a cross-licensing deal, you license your IP (technology, patents or both) to another and in exchange receive a license to the other party’s IP (technology, patents or both). Agreements of this type may call for payment of consideration in addition to the “license” to use the other party’s IP.

A license can run until the expiration of the patents being licensed or it can have a fixed term. As mentioned above, royalties for the use of a patent cannot extend beyond the life of the patent, but payments for the use of trade secrets can. A licensor can also provide for termination of the deal if the licensee is not meeting agreed-upon minimum payments, such as low royalty payments being low due to lack of sales, failed milestones, etc.

Patent licensing deals generally provide for a license to the patent in exchange for payment.  Payment can be in the form of a flat-fee, royalties (fixed amount per unit or a percentage of sales), milestone payments or a hybrid.  Royalty payments are typically based on the sale of products containing the licensed material.

Some issues to think about when determining what the financial arrangement will be:

Many patent owners tend to skip over the “boilerplate” legal terms when negotiating a licensing agreement.  These terms can be very important in the event that there is a later dispute. Some of the legal issues to think about include:

The questions above are only some of the considerations to think about when planning a patent licensing deal. Additional considerations arise when licensing other IP and technology. To draft an agreement based on a template downloaded from the internet would not provide justice and although may save a few dollars from the start will likely elevate costs enormously if something goes wrong. Our advice – don’t be “penny wise and pound foolish.” An experienced IP attorney can guide you through the process and work with you to achieve your goals from a business, financial, and legal perspective.

View all posts by: Lillian Shaked